In Nizhny Novgorod, I was only once and wrote about my own impressions about the city, I will not be repeated. Most of my day took a walk around the Nizhny Novgorod Kremlin and the surrounding embankments. All this city center, fairly well maintained, with beautiful views of the the other side of the river. Great place for walking, I recommend.

Walk through the Nizhny Novgorod Kremlin

If you are going to see Nizhny Novgorod, then anyway find yourself in the upper part of the city, where the Kremlin is located, to walk It is here. First of all, for me personally, the Kremlin turned out to be valuable not by its history and culture, but by the fact that inside it and around exemplary urban environment. Here, indeed, nicely located: lawns, flower beds, paved paths, everything is clean and licked. And what a view from the high bank! Yes only for the sake of one he can come here every weekend for a walk. Okay, I already wrote about the view in my post about Nizhny Novgorod. Exhibition of children’s works, dedicated to May 9 Below you can see the fortress wall 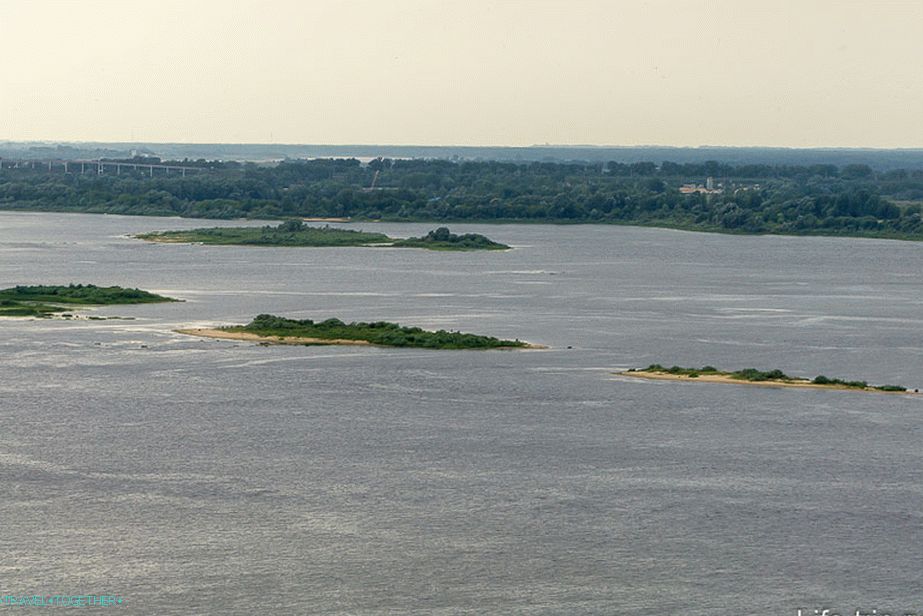 View of the Volga at the confluence with the Oka Great place for a photo View from the Kremlin to Nizhny Novgorod Observation deck outside the Kremlin The Hill of Poets and the Bird The Nizhny Novgorod Kremlin has been well restored, and even almost with scratch built one of the walls, with the result that he again completely closed Here we recall the Kolomna Kremlin, where, on the contrary, there is only one wall left. In Nizhny Novgorod, the Kremlin wall can be walked by making an incomplete circle (further closed). And at least some special types of you will not open (exactly the same views are opened and not from the wall), but so can be a bit touch the story. Perhaps unusual seems that Kremlin wall repeats the landscape, going down the hill to the Volga. Therefore, on your way along the wall will meet the steps of the gigantic sizes, and return to the starting point will have to, or the same expensive on the wall, or on the territory of the Kremlin, but also up. I walk in the Kremlin and Nizhny Novgorod Not without the rock art of modern Aborigines Walk along the fortress wall Exposition in one of the towers 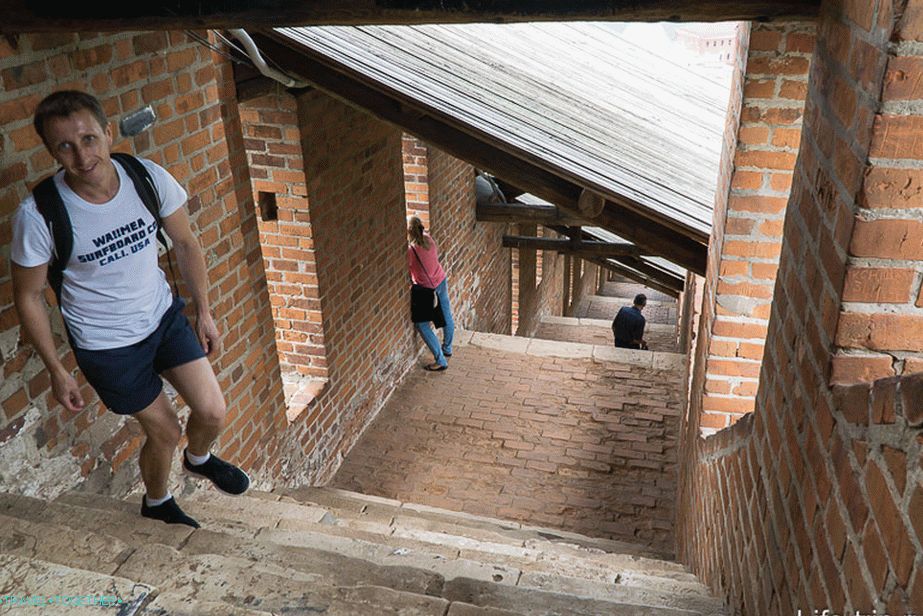 Ladder with high steps – the wall goes down This is how this staircase looked like before the restoration. Photo of the remains of the wall before restoration

A piece of new wall and the Conception Tower

The Kremlin is the main historical landmark and center Nizhny Novgorod. The first wooden fortress appeared here still in XIII century, when Prince Vladimir, Yuri, who founded the city. On the high bank, in the place where the Volga and the Oka meet, there were first earthworks and wooden walls were erected. In times Ivan III Nizhny Novgorod becomes an important strategic point, here is a permanent army. Stone walls and towers Kremlin were built in the XVI century under the guidance of the famous architect Pietro Francesco (Peter Fryazin), who specifically for this sent from Moscow. In the 16th century, the Kremlin repeatedly subjected to siege, but was never taken. After in 1552 was taken Kazan, the military significance of the Nizhny Novgorod Kremlin decreased According to legend, somewhere in the territory of the Kremlin is stored famous library of Ivan the Terrible.

Under Catherine II, the walls were rebuilt due to which the Kremlin gradually began to collapse and decline. He no longer had the former military significance, but during the war 1812 it was from the walls of the Kremlin went Nizhny Novgorod the militia. Since then, the Kremlin has been restored several times; territories and in the towers functioned museums and administrative building. In the Soviet years, part of the Kremlin was nearly demolished for the expansion of Minin and Pozharsky Square (in those days it was called Soviet), but this was prevented by the outbreak of the Great Patriotic War war.

The wall is open from 10 am to 5 pm from September to November and from 10 am to 20 pm hours from May to August. Now you can go from the Dmitriev tower to Conception (it has already been opened). 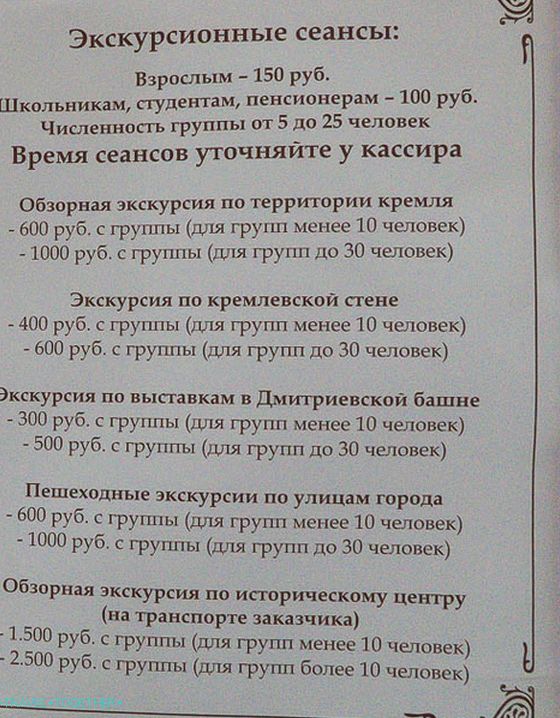 The cost of excursions to the Nizhny Novgorod Kremlin Plan of the Nizhny Novgorod Kremlin

The point marks the Dmitriev Tower, near it is one of the entrances to The Kremlin and the ladder on the wall (ticket office in the same place). Walk through it is better to start the wall from here.