Kamala Beach at Phuket in the top three most popular holiday destinations on the island and well suited for relaxing holiday with children by the sea. Its feature is that that the coastal route goes east and does not share the beach itself and living area. Thanks to this, there are hotels that really can be attributed to the first line. And this place is much more calmer than others, where cars and motorcycles constantly scurry about, filling air exhaust and noise. Kamala Beach Bi-equal and from Phuket airport, and from Phuket Town, to them about twenty kilometers. Total beach length about one and a half kilometers, and the width of the sand strip is from five to thirty meters.

The condition of Kamala Beach on Phuket can be divided into three parts.

Along the entire coastline on Kamala Beach grow sprawling palm trees and casuarina (horsetail plants). Before noon they cover the sand with thick shadow. During the tides strip of sand narrows to a few meters, so you can plunge into the sea literally running away. The sand itself is grayish, as it moves south into more small stones appear in it. 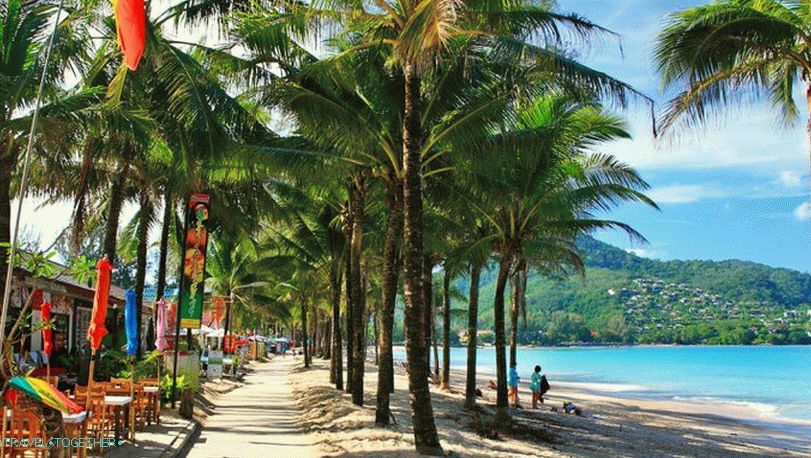 In the south and north of the beach, the entrance to the sea is very gentle, and the southern the part is shallower, which is why it is used for boat parking. If you want to go deeper, then go to the central part, but during low tide, it also grows shallower. You can safely enter the water: large stones and fragments of corals are not found. 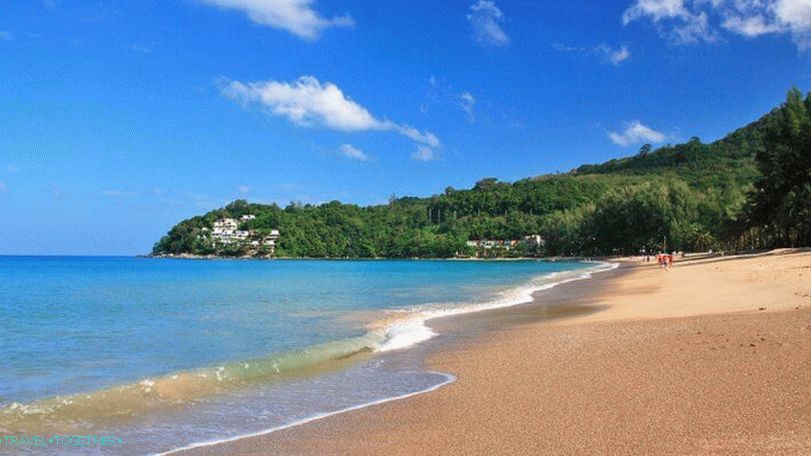 The color of the water varies with the time of day. In the morning when the rays glide over the surface of the sea, it is bright turquoise. After in the afternoon and in the evening it becomes grayish due to the sand at the bottom. what is an optical illusion, the water is as gentle and clean as on Kata or Surin beaches. 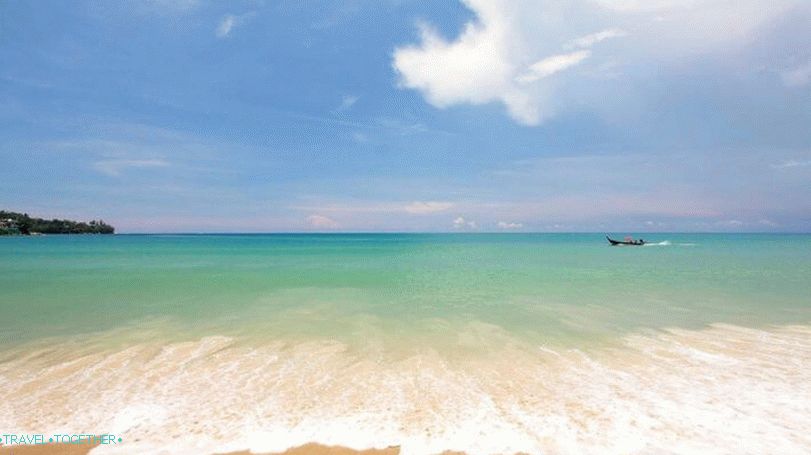 Kamala Beach in summer is high waves but this is the general rule for the west coast Phuket. By the way, this is a great place to lovers of surfing! During the change of seasons (spring and autumn) the excitement is moderate, rather even pleasant. During the winter holidays Kamala Beach is often completely calm. Read more about the seasons. in Thailand.

Due to the abundance of tourists, Kamala Beach in Phuket does not shine cleanliness The most thoroughly cleaned on the northern edge, where Novotel is located, and also in the center, where the strip of sand allocated to the hotel Kamala Beach Resort. 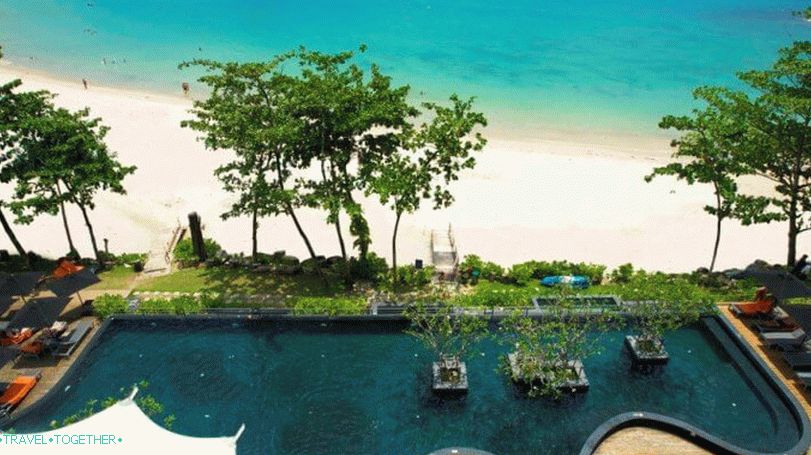 It is worth noting that the long green twigs, broken off from casuarin for garbage for some reason are not considered. Therefore, their number as the distance from the water increases.

Vacationers on Kamala Beach are provided with umbrellas for rent and sun beds. A set of two sun loungers and an umbrella cost about 200 baht per day. Permanently offered Thai massage services, the session of which can be obtained not only in the cabin nearby, but also right on the sand. 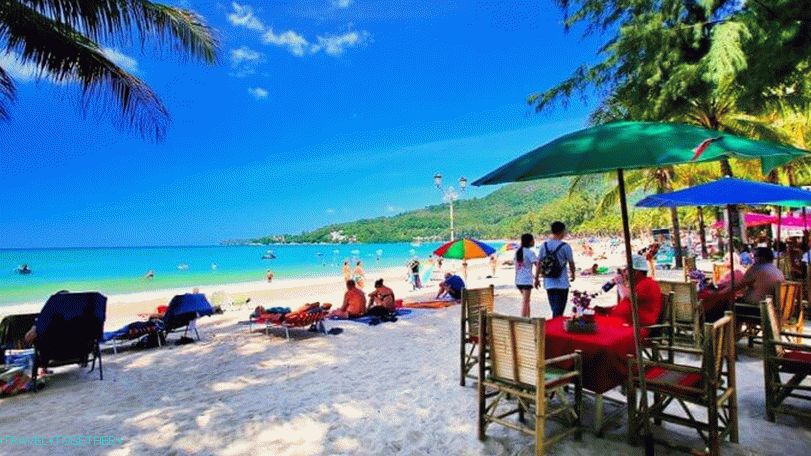 Along the coast there is a path. It separates social and cultural enterprises. – cafe, souvenir shops – from the beach. In the northern part of the beach on This path overlooks the doors of hotels. A little further from the sea, near with the police station, there are hot cakes sellers and ice cream – the so-called makashnitsa. It’s cheaper there than in a cafe, but lunch on a shady veranda overlooking the sea looks more attractive. The average bill in a beach cafe about five hundred baht for two persons. 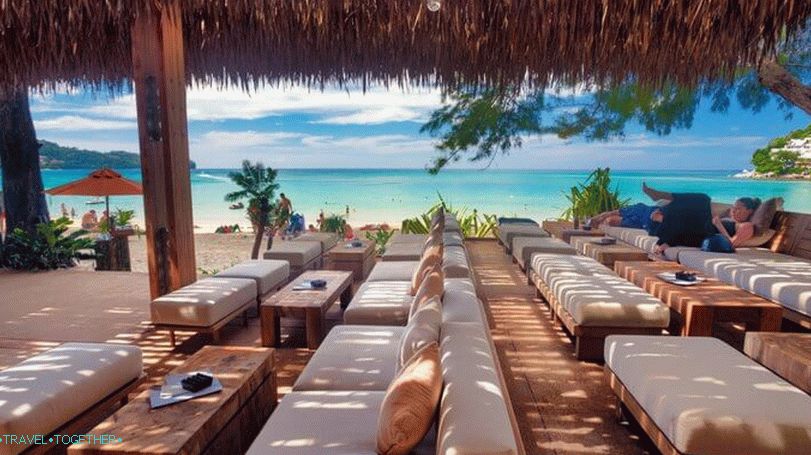 The northern part of the beach is attractive due to the presence of the club and restaurant. Café Del Mar, opened in 2016. It has a pool. Besides all kinds of food, also serves live music. Main movement starts after six in the evening when vacationers move from loungers on the dance floor. There is also a bar and Vip-zone. On weekends crazy fun starts already at 14:00.

For those who are interested in what to do on Kamala Beach, we Especially recommend the show Phuket Fantasea. Look at the grand performance involving hundreds of actors and animals are going tourists from all over the island. The total area of the entertainment center 50 hectares, on its territory the restaurant Golden Kinnaree, accommodating up to 4 thousand visitors at the same time. 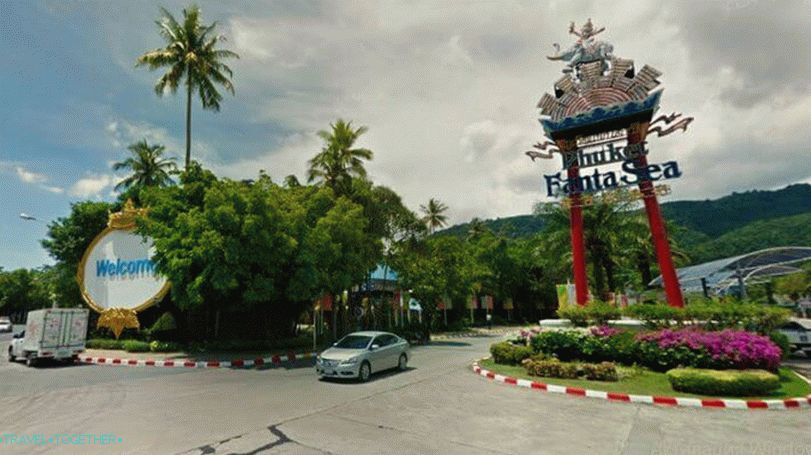 In a residential area near the beach there are restaurants and bars. massage parlors, tour desk. There are no large shopping centers but buy everything you need – beach accessories, daily clothes and shoes are not difficult. In general, Kamala has everything to rest comfortably and tastefully.

Hotels of Kamala Beach in Phukemogut can satisfy both Epicureans and ascetics. For the first five star open hotels, and for the second – democratic guesthouses. Pick the most suitable hotel can be on sites hotellook.ru or roomguru.ru. BUT The best of them you can see in the selection below.

From Phuket Town get to Kamala Beach at Phuketepreashe simple. Between them municipal bus service. Bus station located on Ranong Road, next to the ring. All buses are painted bright blue. Colour. They must have a sign of the route: Kamala – Surin – Bang Tao.

From Patong to Kamala Beach can only be reached by taxi or own transport (rent). Happy bombily take about 300 baht, in the evening – how lucky. If you are driving on your own, then hold on roads running along the coast, but in short will be on highway 4233.

Transfer from the airport to Kamala Beach usually comes in package tour operator, but it can be ordered separately. In that If you will be met at the airport. Look for a Thai with a sign and your name on it.

From Phuket Airport to Kamala Beach to go about half an hour. Can choose a minivan or taxi. You will not have to search for them, most likely you just impose this service immediately upon exiting the passenger the terminal. A taxi ride costs around 500 baht.