The distance from Bangkok to Phuket is about 840 km, which can be overcome by car in 11 hours if you go by road number 410. This is without taking into account traffic jams, stops and wild elephants on the road

Since the car is not the most attractive way travel after a long flight, below I will tell you three main options on how to get from Bangkok to Phuket. However if overnight is planned in Bangkok (for example, in the budget Nasa Vegas), and you love to drive, then the car is a good option.

Airplane from Bangkok to Phuket

You can fly from Bangkok to Phuket from both airports, but Flights will vary greatly in price. From Suvanabhumi fly Thai International Airways and Bangkok Airways, services which can hardly be called inexpensive. One way flight will make about 4 thousand baht, and round-trip ticket will cost about 7 thousand baht per person.

AirAsia, NokAir, Orient Thai low-cost airlines plying in Dong Muang and so on, that is, airlines with low prices. Flight cost to one end will amount to an average of 1.5 thousand baht, and round-trip ticket will cost about 3 – 3.5 thousand baht per person.

I recommend to look at tickets and compare prices on Aviasales.ru and Skyscanner.ru, regularly use them.

The main advice to those who are going to fly from Bangkok to Phuket loukostami – book tickets in advance. Not for two or three days, but for two to three weeks, or even a month. Advance booking dramatically affects the cost of the ticket. And the main problem is not even The fact that you overpay twice, buying tickets on the day of departure, and in that they may not be easily available.

Phuket Airport to the beach

You arrive at Phuket airport, regardless of the airport of departure, He is there alone, located in the north of the island. Closest to go to Nai Yang beach, generally you can say next (5 minutes), but it is not very is popular. To the rest go from 30-60 minutes on average, depending where necessary. Read more about how to get from the airport to the beach, read the link. Well, a review of the beaches of Phuket may be useful. 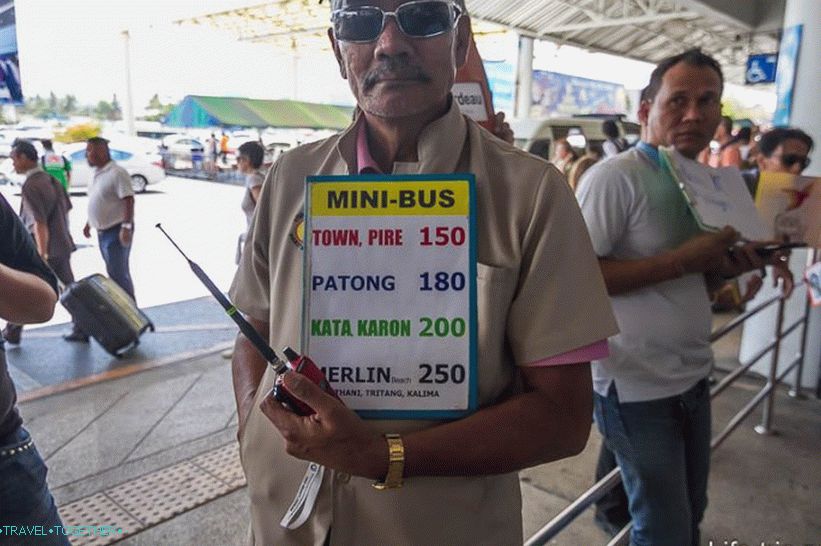 Rates from Phuket Airport to the beach

Bus from Bangkok to Phuket

How to buy a bus ticket via the Internet

The only site that gives us the opportunity to buy tickets to Bus over the Internet is 12Go.asia. It is present almost all bus companies, so the choice will be. But the directions are not everything, just popular. However, Phuket is very popular, so There tickets will be more than.

If your budget is not designed for flights, but there are a lot time, I recommend to pay attention to a more budget way get from Bangkok to Phuket – buses. There are two bus stations in Bangkok, quite remote from the main airport of the country, from where buses go to Phuket. About buses in Tae from me separate post is there to get an idea.

The trip from Bangkok to Phuket by bus takes about 12 hours, and the ticket price ranges from 600 to 1,000 baht per Person, depending on the selected level of service in the bus: VIP, 1st or 2nd grades. And we somehow went by bus with Pattaya to Phuket. The road is the same, but in time a little longer than with Bangkok came out. 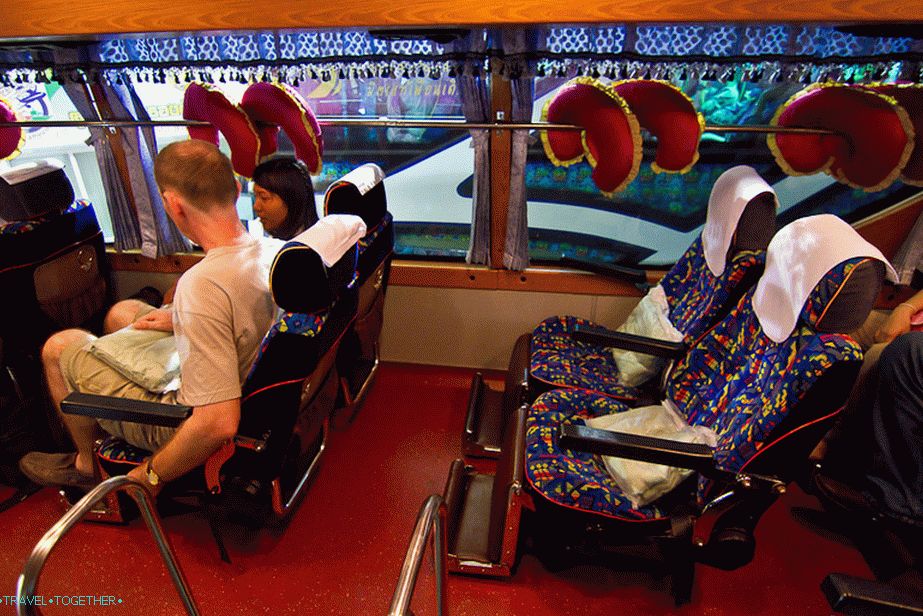 Inside the cabin bus class VIP-32, 4 seats in a row

Southern Bus Terminal (Southern Bus Terminal) or in Thai, Sai Thai Mai is on the opposite side. from Suvarnabhumi to the edge of Bangkok and from here depart flights towards the southern provinces of the Kingdom of Thailand, and the main tourist places South: Hua Hin, Samui, Krabi and Phuket.

From the Southern Bus Station, the first bus leaves at 5 am, and the last – around half past nine in the evening. Most flights starts between 5:00 pm and 8:00 pm, so that the way passengers were asleep.

Northern Bus Terminal (Northern Bus Terminal / Mo chit) is located in the north of the city near the Chatuchak market, 15 minutes walk from BTS Mo Chit station. Basically, buses leave him the direction of the northern areas of Thailand: Isan (Isaan), Chiang Mai (Chiang Mai) and Chang Rai (Chiang Rai). However, there are several flights to the southern resorts of Thailand, including to Phuket.

How to buy a train ticket via the Internet

You can buy a combined train / bus ticket, either in ticket office of the railway station upon arrival, or in some travel agency on the street of bangkok. Of course, the agency will keep a small commission. Previously, train tickets could be bought online at the official site railway roads, but the shop was closed.

The only place where you can now buy tickets through Internet, this site 12Go.asia. Payment by credit card or Paypal.

Electronic bus ticket, the train must be get the original, either at the agency’s office (several points), or by mail. Unfortunately, Thai railways do not support e-ticket system.

There is no train connection to Phuket, as in the neighboring Phuket Province Krabi. So, traveling from Bangkok to Phuket will be a combination – first you have to get to Suratthani city, there take a bus, and go by it already Phuket itself. For me this option is not very convenient, too for a long time, I’d rather go by bus right away. Separately, about the railway road I have a post.

Since there will be two vehicles, you will have to buy two tickets: on the train, and on the bus. You can do this separately: first railway ticket to railway station, then on arrival in Surtani ticket to bus. But it is better to take a combined ticket in advance. WITH The combined ticket travels well for two reasons:

The road from Bangkok to Phuket will take from 8.5 to 11 hours, the fare will be from 300 to 1.5 thousand baht, depending on selected class of service and relocation scheme. 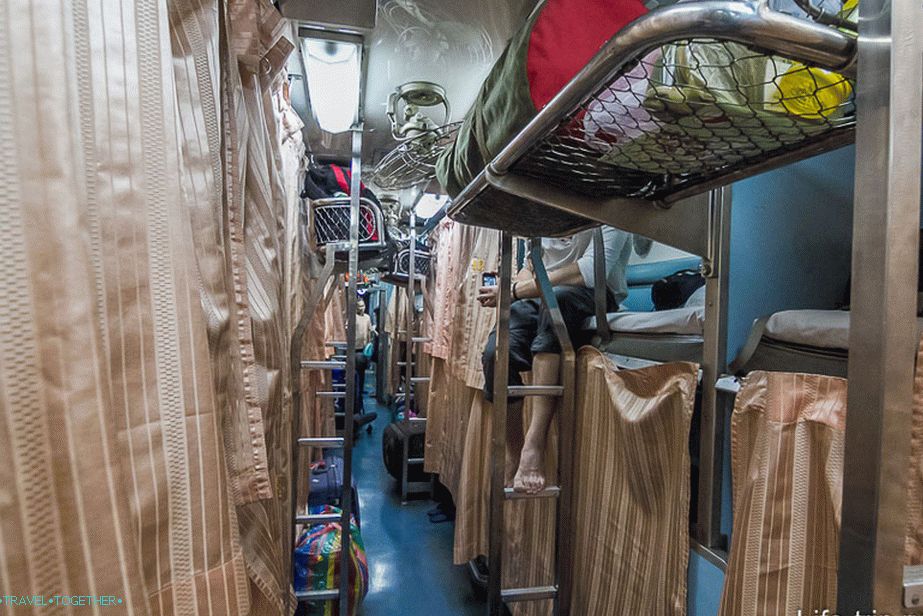 The main railway station of Bangkok Hua Lampong (Hua Lampong), Located in the city center, near Chinatown. Before him You can take the MRT underground metro station, the final metro station and also called Hua Lampong.

For more confidence that you will sit on the right the train, at the right time, I recommend to take care of in advance buying a ticket, especially if you want to save money and go to the 3rd class. It is very likely that there will be no tickets. If you suddenly decide to buy them on the day of departure. schedule South direction of the site. Also remind on the Thai site railways can not buy a ticket, only at the box office.

On a rented car

This option was voiced at the very beginning of the article is not easy for beauty. Suvarnaphumi Airport has an entire sector with counters. companies that provide rental services. If you are serious consider auto-mileage from Bangkok to Phuket as a way travel, then the choice and payment of the car is best done in advance, online. Otherwise, you will have to go on what will be in the garage the distributor at the time of your appeal (if anything at all). The car you have ordered is delivered to the arrival area, it is convenient. Read more about car rental in Thailand via the Internet.

Car must be booked through Economybookings. Immediately on one site will see offers from all major international distributors. The price will be lower than directly plus a full one. insurance can give for free. I myself take only through this intermediary.

You can get from Phuket to Bangkok in one day, but only in that if you do not have small children, and you are by profession a trucker, and you are not afraid of a ten-hour drive on the highway after a ten-hour flight (and in the case of a flight with a transfer there will be all 15 hours). More relevant, rent a car so that rest a couple of days in Bangkok after the flight, and then only slowly pushing towards Phuket, on the way stopping in interesting places of the Kingdom of Thailand.

Rental price starts from 500 baht per day, plus gasoline for 780 km of track, plus a deposit in the amount of a franchise (5-10 thousand baht), which then return. And the last thing – when you pass the car in another place Some companies charge a fee for refund. But, for example, Hertz is not takes nothing if you take the car for a period of 5 days. 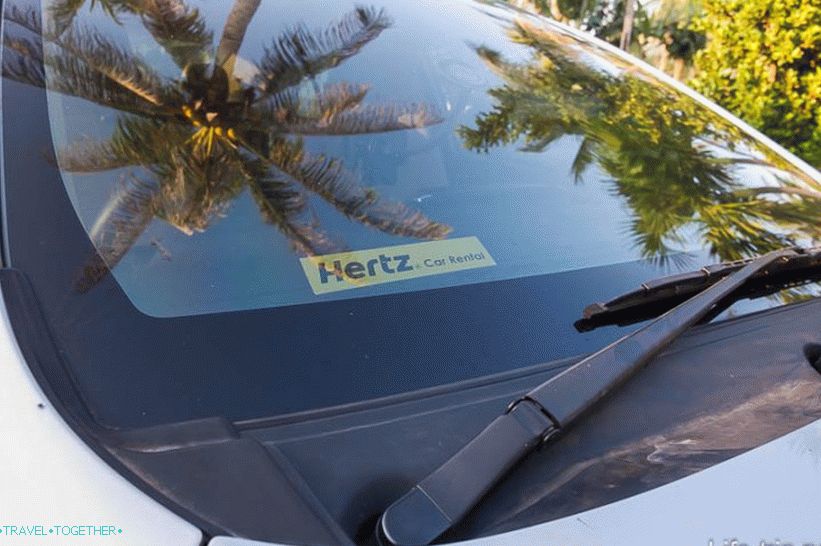 By car Bangkok-Phuket, the car from Hertz

P.S. If you want to know about housing options for a short time on Phuket, I have a selection of good hotels, based on rating and reviews. In general, the choice of hotels in Phuket is huge, It remains only to open RoomGuru and choose what you like.