A huge number of reviews left by tourists visited Thailand, concernShow Phuket Fantasy. However, it is fascinatingly beautiful and large-scale. a spectacle – a whole herd of elephants participates in it – only a small one part of what can surprise Phuket Fantasy Park. Title institutions, in terms of English grammar, written wrong – Phuket FantaSea. But traditionally its transcription It sounds exactly like “fantasy”, which most accurately reflects what going on there.

Phuket Fantasy is an amusement park, designed for family holidays. It has two territorial dominants: the Elephant Palace, where the theater show takes place, and A restaurant. The fact that the institution catering is written with a capital letter – This is not by chance, it is part of the show. At the entrance of visitors give out two stickers that are hung on the chest. They are written on numbers of places in both establishments. A little more about this unusual institution can be read by clicking on link: http: //www.saletur.ru/Thayland/o_Phuket/sights/601_Phuket_Fantasea.htm

In addition to them, in the park Phuket Fantasiast complex of children attractions, toy stores and souvenir shops. You can ride on elephants, take part in interactive street shows with elements folklore buffoonery. The total area of the territory is 50 hectares.

Extravagant show Phuket FantaSea held at the Palace of the Elephants, built in style Sukhothai Palace with traditional for Southeast Asia fanciful decorations and gilding. Among the statues stand out 999 figures of elephant defenders. The auditorium seats 3 thousand spectators, and the scene is so great that as the scenery of the Thai village live buffaloes, goats, chickens and other animals are used. Show begins with a catwalk along the central passage of forty elephants in accompanied by drovers dressed in national costumes. Above Acrobats make dizzying stunts with spectator heads. They illuminated by spotlights and look like stars.

The plot of theatrical action is similar to the script of an Indian film. The struggle of Prince Kamal for his beloved – the usual peasant girl. The bandits who stole the beautiful peyzanku help the demons. Kamal’s armies are gods. Shaw Phuket Fantasy accompanied by uncomplicated tricks in the style of Christmas trees, designed for children (read more about holidays with children on Phuket). It ends with a corps de ballet of elephants. Goodbye take a picture with the artists, on a golden chariot, with an elephant or tiger cub. Photo expensive – 850 baht. Photograph in the hall prohibited. Sell DVDs with show recordings.

Golden Kinnaree is located on the lake shore. It has 4 thousand. seats Food on the principle of “buffet”. For 400 baht You can try to eat everything you see. Just do not forget that drink all this for nothing will not work. Fluids are fed for money. Thirst will cost you 90 baht for a glass of mineral water. 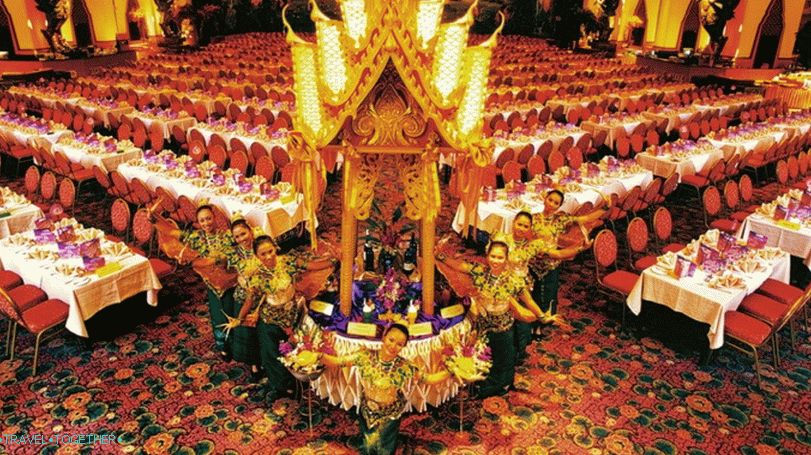 The price of the show Phuket Fantasy depends on intended cultural program. If you decide to see Only theatrical performance, it will cost you 1,800 baht. One visit to the restaurant – 1100 baht. Combining one with another more profitable: a set of bread and spectacle is 2,200 baht. Buy ticket can be here.

Transfer back and forth will cost 300 baht. Costs all the rest of the shopping, rides and photographing with animals you must plan it yourself. 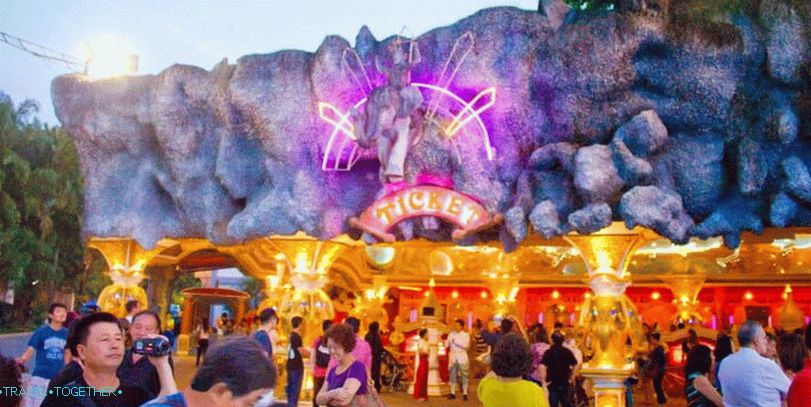 Phuket Fantasy Show is a program point from the category must see. How to get to Phuket show Fantasy will tell you in your hotel. And even more than that – managers will contact the park administration to ensure hassle-free transfer. The park is located near the Kamala Beach (description of beaches in Phuket). Overlook huge phuket banner FantaSea is simply impossible.

Show Phuket Fantasy on the map